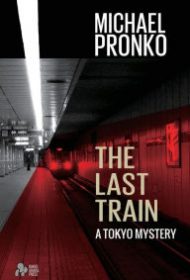 The Last Train wastes no time grabbing the reader’s attention: It opens with a mysterious Japanese woman who leads her hapless American victim to a Tokyo subway station, then pushes him into the oncoming last train of the night.

After this breathtaking start, we meet police detective Hiroshi Shimizu, still recovering from a breakup with his American girlfriend. He’s assigned to financial crimes because he speaks fluent English, but a friend and mentor keeps pulling him into homicides. He’s placed on this murder because the victim was American and his English skills might be helpful.

From there, author Michael Pronko deftly weaves together a plot that flashes back and forth between the killer, who we learn is named Michiko Suzuki; her dark, tragic past, and Shimizu’s determination to track her down. Along the way, Pronko introduces a cast of fascinating characters, including Shimizu’s gruff mentor Takamatsu; sumo-wrestler-turned-cop Sakaguchi; an accountant and photographer who have been helping Suzuki with her killing spree, and the Tokyo yakuza (organized crime syndicate). As the plot unfolds, Pronko takes readers through Tokyo’s sexually explicit “hostess bar” underground scene in the city’s lively Roppongi nightclub district, authentically rendered by the author.

For anyone who loves crime and cop novels, or Japanophiles in general, this is a terrific thriller. And fans of author Barry Eisler’s early novels featuring John Rain, a Tokyo-based half-Japanese assassin, will find the same satisfactions here. Pronko lives in Japan, and his knowledge of the culture and settings are obvious and impressive. The characters are believable and never condescending. Japan isn’t a mere exotic locale for the narrative; the story closely follows Japanese cultural values such as loyalty, honor and reciprocation.

In all, this is one you won’t want to miss. The Last Train will leave you scrambling for Pronko’s two other books featuring detective Shimizu: Thai Girl in Tokyo and Japan Hand.