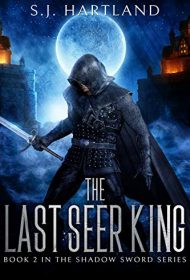 S.J. Hartland juggles an impressive amount of characters, intrigue and sheer action in The Last Seer King, the second entry in her epic Shadow Sword series.

The author imagines a vast realm ravaged by war and sorcery, a world where the final scions of a noble line launch an epic battle against forces of evil. Here, however, the basic good-versus-evil dynamic is complex, thanks to shifting loyalties and the vast cast of characters.

In this wide-ranging plot, the ghoul god Archanin, a literal blood-sucker bent on widespread destruction and conquest, forges unlikely partnerships with mortal rulers. Kaell, the titular 19th Bladesman from the first installment, returns here in another human form entirely; his lord Val Arques is taken prisoner by witches in the frozen wastes known as the Icelands and must confront a torturous inner secret to persist in his mission. Roaran, an ancient king, strives to defeat Arachanin; Dannon, warlord to a vicious group of slavers, seeks answers to his own questions about his roots; Myranthe, sister to an Ice Lord, aims to raise a force of death riders.

These are just a fraction of the characters in this story that delivers a scope and complexity akin to Game of Thrones. Even with the map at the book’s beginning and appendix of characters at its end, the precise nature of the cast and their relationships may confuse newcomers to the series, as little else is offered by way of backstory. Readers also might find that the narrative tends to slow when Hartland delves deeply into the mythology of her imagined world.

Yet, the author writes compelling, fast-paced battle scenes (never shying away from gory detail) and vividly portrays the magic and sorcery at the heart of any engaging fantasy—all of which will hold readers’ interest.

Those who enjoyed the series’ first installment will find plenty to sink their teeth into in The Last Seer King, as will fans of dense and complex fantasy.