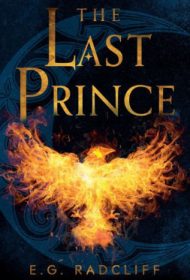 At its core, E.G. Radcliff’s gritty, surreal, YA fantasy The Last Prince is a paean to the power of friendship.

The story follows Ninian, an 11-year-old orphan whose family has perished and who lives meal-to-meal, shelter-to-shelter on the streets of the Maze, a once-thriving seaside city now ruled by street gangs, violence and fear.

Soon, Ninian runs afoul of the shopkeeper Máel Máedóc and, to pay a debt, agrees to fight others for money, leading to his unwilling adoption by one of the Maze’s gangs as a street fighter. It’s a commitment that quickly turns deadly, as Ninian is plunged into a world of murder, mercenaries and mayhem.

Máedóc then asks Ninian to help him heal a badly injured boy he’s discovered near the seaside. Ninian eventually learns that Áed is half fae, or fairy; this challenges his preconceptions, as Ninian’s mother trained him to hunt and despise the magical race.

Ninian’s blossoming friendship with Áed ultimately helps the boy, a scion of a noble family, learn more about his royal roots and begin to come to terms with them, even as he seeks to escape the cycle of violence that’s threatening his existence. Radcliff does an impressive job of showing how their bond gains importance as the novel progresses, which eventually gives the narrative its heart and power.

The author writes with an immediacy that makes the Maze’s dark setting feel relatable and contemporary. Her take on the genre is more subtle and human than many fantasies; in lieu of grizzled monsters, burnished knights and grand feats of magic, she opts for human connection and nuanced mysticism.

Readers of Radcliff’s first novel (The Hidden King) will appreciate this in-depth exploration of the series’ principal characters. Yet newcomers won’t be lost in the mix; the story stands on its own as a tribute to the strength of empathy and the uselessness of prejudice.

Overall, young adult fantasy fans will find this character-driven offering a refreshing approach to the genre.