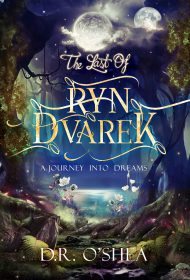 The setting of D.R. O’Shea’s ambitious fantasy debut The Last of Ryn Dvarek is a vast landscape filled with magic, intrigue, epic characters and plenty of action. Indeed, the fictitious Five Kingdoms is a meticulously imagined world that aims for the grandeur of an epic fantasy saga, one with the breadth of a J.R.R. Tolkien or J.K. Rowling novel.

O’Shea begins this journey with the dreams of Cael, the son of a blacksmith living in a village in the kingdom of Kaldia. The 14-year-old suffers persistent, vivid nightmares—otherworldly visions that eventually tear him from his sleepy rural existence after he meets Landon, a roving woodsman, who explains that the dreams are signals of potent magical powers. Landon tells Cael that an academy on a distant island can help him learn to properly harness these abilities. Along with Wynn, a young girl recently orphaned who also holds promising abilities, Cael and Landon set off across the Five Kingdoms, the three experiencing adventures along the way.

The book offers a roughly medieval setting, replete with magicians, troubadours and mercenaries; the Five Kingdoms tout their own complex mythology and history, which O’Shea explores in loving detail as context to the group’s journey. Through stories-within-stories told by campfires and first-person narration by Cael, the author works hard to deliver an immersive world.

Despite O’Shea’s earnest aims, The Last of Ryn Dvarek sometimes stumbles: The copy carries an unfortunate amount of fundamental grammatical errors, and the action tends to follow a basic pattern that repeats across the 484 pages.

However, the author makes up for these missteps with an impressive commitment to his characters, their struggles and the details of his imagined world, from its vernacular to its ancient history. This, combined with the inclusion of standard crowd-pleasing fantasy elements, make the book an entertaining read.

True, the writing may be a bit raw. But the story offers enough heart, action and charm to be worthy of the author’s impressive ambitions.