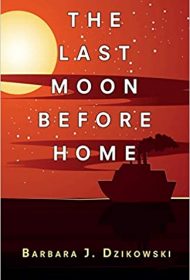 In this emotionally charged novel, the second in Barbara J. Dzikowski’s Moon trilogy, the strength of generational bonds and the power of love evolve amidst life’s complexities and long-hidden family secrets.

In 1973, in Willow, Ohio, Noel Trudeau risked her life to give birth to her daughter, Willow. Now Willow is in her 20s, and with information from her mother’s diary, she decides to track down her biological father, Leon Ziemny, who is unaware of Willow’s existence.

The story artfully unfolds as Willow soon finds herself in Leon’s predominantly Polish steel mill town in Langston, Indiana, working at the longstanding Mazurka Inn bar owned by Leon’s dad, Walt, recently diagnosed with Alzheimer’s. While she chooses not to reveal her true identity, a familial bond easily grows between Willow and Walt, and surrounding family members begin to appreciate Willow’s former nursing training and her special ability to use “therapeutic fibbing” to handle Walt.

Married 60 years, Walt’s wife Mary’s poignant commentary of “It’s a sad thing alright losing your husband when he’s still alive,” speaks to the ravaging consequences of his illness. Adding to the complex and frustrating circumstances, as Leon finds it increasingly difficult to accept his father’s worsening condition, his growing distance from his own stoic wife opens her to a neighbor’s flirtations.

Dzikowski does a heroic job handling Walt’s ever-worsening dementia. Whether portraying the humor of Walt’s downing an entire communion chalice, the violence of “sundown” episodes, or half-Polish/half-Cherokee friend Gus’s ancestral ponderings on the disease (“The brain gets dimmer, but the spirit gets brighter”), such intimate moments are realistically rendered. Gus’s long-running fascination with the Kennedy assassination adds another dimension to the work, alongside current events that dot the story’s timeline, including the Clinton/Lewinsky debacle, JFK Jr.’s downed plane, and 9/11.

While part of a trilogy, the story easily stands alone. Those drawn to the honesty, realism, and fragile dynamics of family connections will find The Last Moon Before Home a thoroughly moving and engaging read.