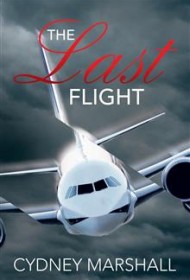 In this entertaining mystery/thriller/romance, two CIA agents attempt to solve the case of a missing airliner while trying to save their marriage.

When AmerAsia flight 56 disappears from radar, Alexis and Markus Dain are called to Langley for the investigation. Markus has recently been demoted for anger issues that are spilling over into his professional life. Alexis is worried about Markus and upset that he believes rumors that she is having an affair with handsome British agent Connor Moore.

Demoted or no, it’s all hands on deck at the CIA, and Markus is assigned to a team with Alexis to find out what happened to the airliner. Is it terrorism? A crash? A hijacking? When the agency brings in Alexis’ alleged lover Connor—an expert on airline terrorism—Alexis must put any marital concerns (and possible feelings for Connor) on autopilot while Markus is forced to swallow his pride for the greater good.

The author, a former flight attendant, has the kind of airline experience that gives credence to this story, much of which involves working knowledge of a 777. “On the rebound,” she writes, “the rear wheels on both sides of the aircraft chirped before Jardine brought down the nose with a thud, correcting the angle for alignment with the runway. The wing spoilers came up as he applied the toe brake and reversed thrust…”

The story is rather short and, as a result, the character development feels thin. In addition, the Connor plot thread is never satisfactorily resolved, and some events seem contrived to accommodate a sequel, which the author is planning.

Still, overall, the story makes for a satisfying read, and those who devour mysteries along with their breakfast cereal will surely find it an amiable diversion.