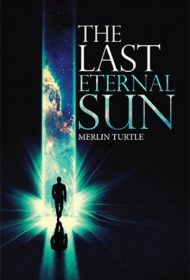 Merlin Turtle’s latest book (after 2018’s Dragon Diary Saga) is a wildly ambitious science fiction epic that takes place on a massive habitat that rotates around the same star that a mythical planet known as Earth orbited in a far distant past.

The Ring encircles the “last eternal sun,” and its inhabitants lead a low-tech but apparently idyllic existence. Anatha, who lives on a floating sky grove and oversees the plants, has never questioned why she exists or why the Ring was constructed. But when the remains of a city are discovered, Anatha and her teacher, the bard Ambrose, are forced to reassess every aspect of their existence.

With the mystery propelling them, Ambrose discovers some jaw-dropping theories: that humankind effectively restarted the universe millennia earlier and that the populace of the Ring was genetically modified by aliens, and others. After uncovering more than a few conspiracies behind the Ring’s leadership, Ambrose vows: “I alone am left … to remake humanity.” Thus, begins an epic journey that takes readers to the far reaches of the universe, where mind-blowing revelations are uncovered.

Turtle’s writing is competent; the characters are adequately developed, and the plot twists at the novel’s end come fast and furious. Unfortunately, this story is laid low by a storyline that suffers from “kitchen sink” syndrome, an affliction where the plot becomes muddled with excess elements. In this case, the plot is stuffed with pirates, aliens, Arthurian legend, Nephilim, interplanetary spacecraft that resemble dragons, astral projection, and more.

Additionally, the novel has far too much exposition—rambling sequences that explain the backstory but interrupt the narrative flow, sabotage the tension level, and, ultimately, impede the reader’s ability to become immersed in the story. Finally, the 100 pages of supplemental information at the back of the book, while interesting, are unnecessary.

For these reasons, this bold, visionary work of science fiction regrettably falls short.