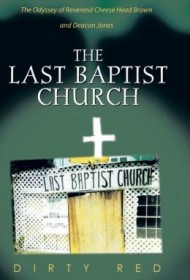 The Last Baptist Church is part fiction, part autobiography, part comedy routine. The author, who also calls himself “the heathen,” describes his book as 300 pages about “black religious humor.”

The book features two fictional characters: Reverend Cheese Head Brown and Deacon Jones, who reside in the fictional town of Turkey Scratch, Arkansas. Most of the action centers around the town’s fictional church.

The book is structured in brief vignettes, each a page or two long. Although the author has a flair for writing, the vignettes are scattershot and lack logical progression, resulting in a collection that is difficult to read from beginning to end. The author will tell a tale involving the Reverend or Deacon Jones, for example, then give a joke-y take on a story such as Jonah and the Whale, followed by a story about himself and his childhood. At least two of the entries are repeated, including a tale from his upcoming new book.

Some of the stories are cute, some amusing; many are riffs on Biblical tales. Each one ends with a comedic punchline, but readers should be prepared: the author throws around the f-word and the n-word freely. In one story where “Dirty Red” is dunked three times in the baptismal pool to be “saved,” the pastor tells the rejoicing crowd, “Now tell the people what you believe.” The little boy, dripping water, turns to the congregation and says, “I believe this mother-f* is trying to drown me.”

The stories have a certain humorous outlook that could be entertaining, but without any organization, the material is more suited to a stand-up routine than a coherent, accessible collection of stories.