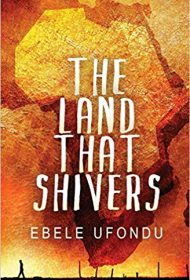 The Land That Shivers takes readers deep into the heart of modern-day Nigeria, where a young man faces difficult choices as he tries to care for his family.

When Asa’s father is killed in a tragic bus explosion, the young college graduate quickly assumes the role of head of household for his mother and three sisters. In this capacity, Asa experiences firsthand the inadequacies of the health care system and government services. Despite a degree in mechanical engineering, he struggles to find a job and feels enormous pressure to provide for his family.

Meanwhile, corruption is seemingly everywhere, including in the governor’s mansion where the rich, unscrupulous governor leads money-laundering schemes to enrich himself while his citizens endure unpaid salaries and unsanitary water. Against this backdrop, Asa faces a pivotal choice: join in the corrupt system to ensure the well-being of his family or give way to poverty.

Readers will feel for Asa’s humanity and care deeply for his outcome, as his journey becomes a microcosm of the story of the survival of Nigeria in the face of immorality and deprivation. The author uses vivid descriptions of both setting and character, allowing readers to experience a different culture. Her description of a bus ride is enough to make readers claustrophobic: “Twenty-two people were squeezed into a space built for twelve; each single-passenger seat accommodating two, to increase the profit for the transporter in this unregulated business. Of necessity rather than choice, passengers sat with their hips squeezed against each other… A hole where a section of the bus floor had rusted away let in as much dust as the open windows.”

While overly wordy narration slows the story in parts, readers will appreciate the picture Ufondu paints of a tortured Nigeria, its physical beauty juxtaposed with the ugliness of a corrupt system. Ultimately, The Land That Shivers provides a compelling coming-of-age story and insight into the country that goes well beyond the news headlines.