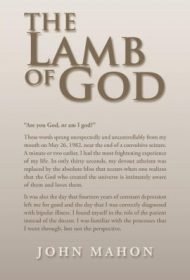 In The Lamb of God, neurologist John Mahon attempts to bridge the gap between science and religion to solve the problems plaguing modern humanity.

Mahon suffered from bipolar disorder, alcoholism, and an adulterous lifestyle. Hypnosis offered some relief and sparked his interest in mysticism. Then, during a terrifying seizure, he felt certain God wanted him to murder his four-year-old son. Confused, he heard himself asking, “Am I God, or is he God, or are you God?” When Mahon answered, “I am God,” his pain ceased and he was filled with ecstasy.

Mahon claims that divinity is within us. Through “interpreting the Bible as myth, studying science, exploring other religions and heretical Christian texts, and indulging in meditative prayer,” he grew his faith and now preaches that “accepting our own divinity” is the first step to finding peace and addressing “many problems confronting humanity on a global scale.”

From the first page, Mahon’s highly intellectual writing shines. His memories of growing up in Northeastern Pennsylvania’s coal mining community are fascinating. Mahon also makes a solid effort at documenting the religious writings used to bolster his views.

The strength of his nonfiction writing, however, is undermined by an awkward shift to fiction-style chapters that relay past conversations and events. Here, the dialogue seems forced and unnatural, and readers will question the accuracy of such detailed conversations after so many years.

Christian audiences will also find the book’s title misleading. Mahon’s emphasis is his own life story—not Jesus, the Lamb of God, or the stew of religious theologies he offers as a side dish. His frequently admitted confusion over Christian scriptures is appreciated, but it also weakens his authority. Additionally, he fails to explain how salvation, the afterlife, and other staples of religious experience fit into his belief that divinity lies within each of us.