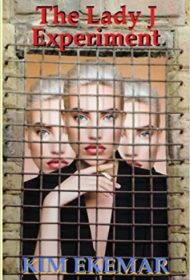 A blend of near-future science fiction thriller and literary speculation, Kim Ekemar’s latest release revolves around three female clones who escape the torture of their research facility prison to enact revenge on the doctor who created them.

In the mid-21st century in a remote research center in Scotland, a morally bankrupt scientist named Sean Galmuth manages to clone the first humans. After illegally harvesting ova from an unsuspecting woman, he uses a “batch-cloning” technique to create Jenny, Julie, and Jean—three identical clones who are connected by one mind that instantly shares thoughts and experiences between the triad. When one feels pleasure or pain, for example, the others feel it as well.

After being systematically tortured by researchers in an effort to improve and sell the clone technology to unethical governments for military usages, the clones vow to escape their confinement. After weeks of planning, they finally break out of the facility and make their way to London where they begin to orchestrate an elaborate plan to avenge themselves in grand bloody style on Galmuth.

The obvious hook for this novel is the premise, which tantalizingly blends elements of science fiction with crime fiction. Issues arise, however, as the narrative unfolds. The near-future background, or world-building, is superficial at best, offering up weak, clichéd fare: robotic delivery vans, driverless helicabs, and little else. Aside from the clone characters, the other main characters are cardboard: either unwitting two-dimensional victims or similar to Chief Inspector Chamberlain, a character with zero depth and emotional connectivity.

But perhaps the ultimate failing is in the anticlimactic way the author choreographs not only the clones’ final retribution on Galmuth but also the final scene. Both are conspicuously void of appropriate intensity and thematic weight.

Science fiction fans will likely find that this story doesn’t deliver the goods. However, speculative fiction fans who enjoy unconventional narratives with potentially thought-provoking conclusions may enjoy Ekemar’s take on the near-future.