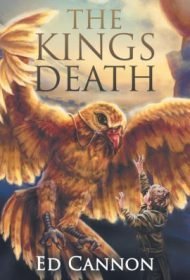 The Kings Death continues the epic fantasy series begun in The Kings’ Assassin, picking up the story of Sillik, now the crown prince of Illicia, his fiance Renee, and his swordmaster Briana as they plunge into a war whose origins are as mysterious as they are far-reaching. With enemies sent by dark forces, and the heroes’ actions guided by gods, The Kings Death makes clear that the world as his protagonists know it hangs in the balance.

The Kings Death spirals further outward from the world described in The Kings’ Assassin, bringing in new characters and kingdoms who share at least as much time on the page as our familiar heroes. Prince Lysander of Aceon, a kingdom defended by warriors mounted on giant birds, is honor-bound to help Sillick, an old friend, and Jaqueline, Sillik’s cousin and wife of King Ametor of Salone. Salone is a key outpost in the war and home to a revered school of magic. There are many others: a plucky thief, an Illicia healer hiding from a rising coup, and a warrior turned against the kingdom after being enthralled by a demon, to name a few.

Where The Kings’ Assassin recounted an adventurous journey, here author Ed Cannon has set his heights higher, intertwining the excitement of battle with threads of court intrigue, political machinations, and hostile takeovers to weave a tapestry aiming for something closer to the scale of the Game of Thrones saga.

If there’s a complaint, it’s that The Kings Death can move slowly at times, bogged down by overextended dialogue sequences which, while faithfully conveying the characters and their motivations, nonetheless drag down the pace of the plot. Apart from that, however, The Kings Death delivers on the promise of its predecessor, and in some ways exceeds it. It has fierce warriors, underdogs, unexpected twists, an epic scale, and a world that feels fully imagined and palpably real, providing an enjoyable escape for any fan of high fantasy.