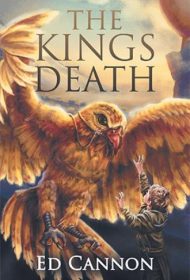 Ed Cannon’s The Kings Death offers a fantasy world in which good and evil battle for control of a magical kingdom. The second in a series, the novel chronicles young king Sillik’s efforts to prevent a coup in his realm of Illicia.

Sillik is allied with seven gods, all forces of good and in opposition to nine gods who are forces of evil. When an assassin under the influence of the nine gods kills his father and older brothers, Sillik leaves Illicia to find the murderer. Upon his departure, other allies of the nine gods stage a coup.

Much of the novel then follows Sillik as he forms alliances, battles dark “Masters” and gathers magical weapons to help him regain his throne and aid in his final confrontation with the nine.

Cannon excels at worldbuilding, vividly bringing the kingdom and its environs to life. For example, he provides an illustrative map drawn by the “Mapmakers of Aceon,” who ride birds of many colors and wear “armor [that] looks like feathers.” The main characters are richly developed, giving readers a vested interest in Sillik’s success.

Unfortunately, the dialogue lacks nuance and tends to rely on stale metaphors. (“When speaking to the imposter king of Illicia, one conspirator says, “please grow a pair, and figure out how to be a man.”)

Further, the plot contains some potentially confusing twists. Some of these will likely be resolved in the series’ third installment, but others lack a plausible rationale. For instance, a deceased bard, whose songs are lauded throughout the story, abruptly returns to life in service of the nine without any realistic explanation regarding why he has been resurrected or why he now opposes Sillik.

While relatively well proofread, the book’s lack of an apostrophe in the title is a glaring error.

To reach a wider audience, the story requires sharper dialogue and some plot revision. Still, Cannon has created a fascinating universe that some might appreciate.

Also available in hardcover and ebook,