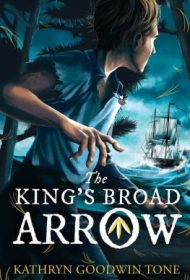 In The King’s Broad Arrow, Sam Nevens, a 13-year-old from Maine, is unwittingly drawn into the central drama of the American Revolutionary War.

It’s 1775 and although Sam is happy helping at his father’s sawmill, he’s well aware of the rising revolutionary conflict. When he tries to stop British naval surveyors from cutting local trees to make masts, Sam is taken prisoner and held for months on a ship outside Boston. The story follows his escape and subsequent embroilment in a series of adventures, bringing him into contact with great men of the day including, Paul Revere, Thomas Paine, Alexander Hamilton and George Washington.

Kathryn Goodwin Tone has a talent for description and paints an evocative picture of America during the revolution. Boston is vividly brought to life through the sights and smells of the docks, coffee houses, spice shops and taverns. Realistic details abound: from “flip,” “a warm concoction made of beer, molasses, rum, and cream or eggs” to the British Navy’s broad arrow mark, used to mark trees they would take for the masts. Sam is a likeable character who develops as the story progresses, finding he’s braver than he initially believes himself to be.

At times, however, the volume of historical information threatens to overwhelm the narrative drive. Sam is a naïve protagonist whose myriad questions are comprehensively answered by the adults he encounters. On the prison ship, he meets a mysterious old Frenchman who has so much to teach Sam that it’s “a bit like being in school again.” Readers may feel the same. When Sam is not asking questions or overhearing conversations, but taking part in action, for example in the Battle of Trenton, the novel is much more successful.

With key plot points unresolved, readers of The King’s Broad Arrow will expect a sequel. Well-written, if didactic, the book is suitable for a middle grade audience, although future installments with an older Sam may have more teen appeal.