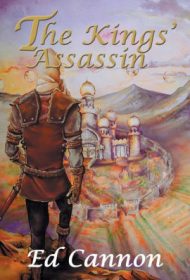 The Kings’ Assassin, by Ed Cannon, is a sword-and-sorcery-style epic fantasy novel reminiscent of works from the 1980s.

Sillik is an itinerant prince whose homecoming to the city state of Illicia becomes his ascension to the throne after a series of royal assassinations and surviving one of his own. Now, in the wake of his father’s death, he seeks to uncover the conspiracy.

Principle among Sillik’s allies is Briana, the gorgeous, formidable Swordmaster of Illicia and his best friend (although there has always been the hint of something more) since childhood. When Sillik embarks on a solo mission to track down the source of the conspiracy, Briana must hold the kingdom together and, ultimately, lead it to war.

Meanwhile, Sillik’s attempts to find answers in the city of Colum pull him into the middle of a coup against Colum’s emperor. There, he rescues Renee, a beautiful, spirited young woman with secrets of her own, and discovers that their quests are intertwined. After surviving a coup, bandits, and dragons, Sillik and Renee join Briana at the dawn of war.

Role play gamers from the 1980s will recognize many of the classic tropes here. Characters fall into specific classes (warriors, healers, thieves, etc.), each complete with their own guild. Fans of authors like R.A. Salvatore, Raymond Feist, or Melanie Rawn will find much to love in Cannon’s epic tale. The mythology of Illicia and Cannon’s conception of the laws of magic feel fully formed and the characters are richly drawn.

The novel starts a bit slow, bogged down by description of land and history, and some will wish less resolution had been left for a sequel. But those flaws are minor in a novel that features palace intrigue, mystery, epic battles, mythical creatures, and a compelling love triangle.

For devotees of the genre, it’s worth waiting for Cannon’s satisfying story to build— just as it should be well worth the wait for the next installment.