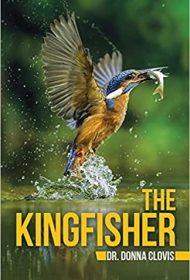 Dr. Donna Clovis’s The Kingfisher shatters the fourth wall and pulls readers in with an invitation to travel through it hand-in-hand with the author. Occupying a strange interstitial space between a long poem and a short novella, the story takes a backseat to the writing itself.

This is both a journey and a quest. The narrator addresses the reader—“you”—repeatedly as she shows them things, moves them from place to place, and invites them to think. The purpose is the revelation of secrets, which quickly turns into a critique of injustice and racism: “Here, one learns quickly that one is no longer free but trapped in the realm of a slavery and segregation…It is the place where life doesn’t matter, especially if one is a Black life.”

Racism, abuse, injustice, and George Floyd are at the center of this story. The places, characters, and even the Kingfisher, which becomes a mythical creature capable of breathing warm air into the lungs of humans, are all secondary and loosely connected.

Unfortunately, with the ideas themselves taking center stage, The Kingfisher lacks a plot, and the journey itself can be confusing, amplified by tangled writing: “It is here in the Princeton Garden, [sic] there is a single wooden bench beneath a willow tree weeping diffusing the twilight into a prism, a still life carved into stone as a history begins with story. And here the well-worn tracks of cedar needles and slender cattails [sic] reeds wave lip next to the fountain pouring trickles of water into the pond of crystal glass.”

A cry for justice can be heard even through the confusing passages and unnecessary literary curlicues. However, this isn’t enough to sustain the convoluted narrative, especially because a lack of cohesion makes it difficult to remain emotionally and intellectually invested.

When the search for a poetic voice overpowers everything else, the resulting narrative is, unfortunately, just an amalgamation of pretty images, and that’s what happens here.