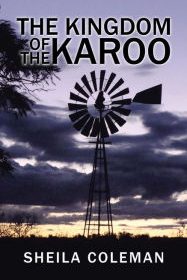 Set in an area in the Eastern Cape region of South Africa known as “The Karoo,” this is a classic good-vs.-bad-guys story involving a greedy and murderous man who sets out to steal a secret potion that he believes will make him millions.

Annette Padstow, married to fifth-generation farmer, Simon, is facing an empty household after her children head off for boarding school. As she contemplates her future, she is visited by her old friend Marilese van Acht, who proposes they partner in a venture raising medicinal plants. Soon, they draft Sarie, known for her knowledge of making medicines, salves and tinctures, to join them. It’s not long before the three have created a successful business, including at least one herbal remedy that could change the face of medicine.

Meanwhile, at a nearby nursing home, an elderly woman is murdered in the middle of the night, but upon discovery, wrongly assumed to have died of natural causes. The dead woman’s nephew, Philip Marshall, takes over her estate, and learning of the work going on with Annette, Marilese and Sarie, develops his own sinister plans.

This is a well-plotted and interesting read with generally likeable characters. The author does an excellent job of describing the countryside, culture and lifestyle of The Karoo, and has created a detailed story with believable twists. Initially, it can be slow going, but as the plot moves, the story becomes a page turner.

There are a few technical missteps, such as the occasional missing word or misplaced punctuation, and the depiction of Philip can be feel a bit heavy-handed. But none of these significantly diminish the read. The Kingdom of the Karoo is likely to be enjoyed by those who appreciate a well-told tale with a plot neatly brought to a satisfying close by book’s end.