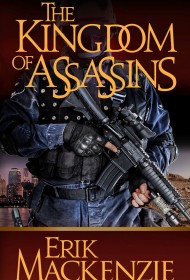 Erik Mackenzie’s geo-political cop thriller The Kingdom of Assassins starts with an exciting one-two punch: a princess kills an assassin on a Saudi sand dune before he kills her, then a black ops-soldier-turned-New-York-City-cop kills a suspect during a raid tracking down a terror cell.

These are the first two chapters of a fast-paced story. Initial chapters continue to trade scenes from Saudi Arabia to New York until Šahrazad, the princess, comes to New York and meets Mike Maclaymore, the cop, over a dead Arab diplomat. Maclaymore yearns to be reunited with Eva, the NYPD captain from whom he’s getting divorced. Yet he feels attracted to the butt-kicking, military-trained Šahrazad. There’s also a backstory about Maclaymore’s mother and his son, who were both killed because of his work.

As the novel unfolds, New York authorities uncover and try to prevent a terrorist attack, and the plot brings in Šahrazad’s father the Saudi King and her brother, the cold-blooded Sayf.

The story has much to recommend it. Mackenzie writes with the clipped, no-nonsense urgency of novelists like Barry Eisler, The writing is engaging throughout most of the book, but feels rushed and disconnected as it nears the ominous surprise ending.

Aside from the disconcerting conclusion, the prose is hampered by missing quotation marks, dropped words, duplicated text and misspellings (“Saki” for “sake”). And although the similes and metaphors are nods to noir masters like Hammett and Chandler, sometimes the text suffers from imagery overload: “Her voice was breathless and smooth, like a cold drink on a hot day at the beach. She wiped the rain droplets from her face. They looked like gems. She seemed to be like a wisp of smoke…”

The Kingdom of Assassins races along but stumbles by the finish line, which could leave readers disappointed, if not dissatisfied. While there are many pleasures here, the manga and screenplay Mackenzie is producing may prove better suited to Mackenzie’s plot and writing style.