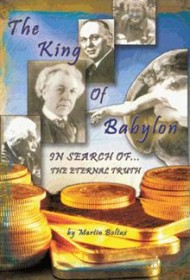 Outsized fantasies run rampant in this short novel, written by an 86-year-old New Yorker. Martin Boltax sounds like he wants to say everything large and important since he first contemplated becoming a writer 50 years ago.

His protagonist is 45-year-old New Yorker John Karras. A former high school math whiz with divorces on his resumÃ©, Karras is sitting in his Manhattan apartment in 1983 when he gets a letter summoning him to a law office. Fearing the worst, he goes anyway and, in short order, learns several things: his parents, killed in a car crash in 1964, were not really his parents; Karras is actually the illegitimate son of one Helen Dukas and her long time employer–Albert Einstein. Among the artifacts of his inheritance, Karras finds Einstein’s secret diary, in which the great scientist sets forth something called the “Unified Grace Theory,” a spiritual formula for the salvation of the world. Once more, E=MCÂ². In this case, though, Ethics equals Mankind times Charity squared.

For reasons unknown, previous recipients of the formula include Booker T. Washington, socialite Brooke Astor, hotel man Conrad Hilton and business mogul H. Ross Perot. But it is left to John Karras to really foul up Einstein’s plan. With the help of an old flame, he develops a vast philanthropic group called Genesis Corporation, providing untold millions to charity. But then a rogue computer called “ART” (HAL’s twin brother?) dedicates all its megabytes to tearing those good plans asunder and wreaking havoc on the global economy through Genesis Corp’s wild market speculations.

Martin is a writer of some wit, but his plot – filled with those big ideas mentioned previously – is farfetched and difficult to believe (though it’s quite often enjoyable in a fantastic, hallucinatory way). As such, it’s unlikely that The King of Babylon will attract a wide audience. The apparently good-natured Boltax doesn’t seem to mind. “…[W]ith three ex-wives and five children,” he writes in an afterword, “I know I can sell at least eight copies of my book.”