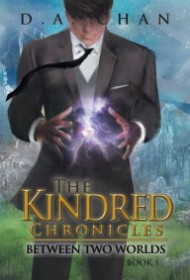 Author David Anthony Chan has an obvious love for language. That much is clear in his debut novel The Kindred Chronicles: Between Two Worlds, a fantasy that incorporates elements of romance and straightforward action with consistently punchy prose.

At the heart of the story is Chris Sayther, a mortal man revived from the dead multiple times thanks to affiliation with Tironius, a member of a noble house from a race known as the Kindred that occupies the mystical city of Demos Geras. Complicating this relationship is the fact that Sayther harbors a steadily growing love for Elline, Tironius’ daughter. The conflicts inherent in this odd triangle are only intensified by a looming war between humanity and the Kindred. As an epic conflict between two species and two worlds ramps up, the bonds between Sayther and Elline run into potentially disastrous challenges.

The leaps between fantasy and romance in this novel generally succeed; particularly successful is the classic trope of a love tale between a pair with conflicting lineages and loyalties (think Romeo and Juliet). This is because of Chan’s focused and effective prose, a style that remains consistently compelling throughout the book’s 370-plus pages.

But Chan’s charming style only goes so far in his ambitious and sometimes sprawling work. While the author presents a refreshing voice, the actual story can get bogged down by the complexities of a dense plot marked by a complex mythology, and the exact details behind the Kindred and their history tend to get a bit fuzzy.

Even so, Chan offers an ambitious debut in The Kindred Chronicles, a work that hints at more impressive and interesting stories to come. Even with its slower moments, Chronicles is a good bet for hardcore fantasy fans and offers interesting moments for aficionados of other genres as well.