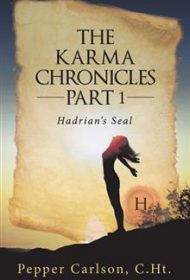 Pepper Carlson’s story is a spiritually supercharged work of speculative fiction told from the perspective of a dead twin who, with a group of guardian angels, attempts to help her surviving sister through a nightmarish life in which she must repay a “karmic debt.” Thematically comparable to Kim Stanley Robinson’s classic The Years of Rice and Salt—an alternate history dealing with reincarnation—this is a much more intimate and didactic tale. A fusion of Biblical myth and New Age philosophy, it’s a heartrending story of self-discovery, transformation, and transcendence.

After losing her life in an abortion that spared the life of her twin sister Kate, the narrator—who calls herself a doppelgänger —enlists the aide of five archangels (Michael, Gabriel, Raphael, et. al.) to help Kate endure her daunting existential journey that, hopefully, will lead her to life-changing revelations and, ultimately, spiritual healing.

Kate’s existence is filled with relentless pain and loss. Her abusive (and abused) mother abandons her. She’s raped as a minor and, shortly thereafter, molested by her alcoholic father. As Kate reaches adulthood, she repeatedly makes the same mistakes as her mother, and the success of her karmic journey of retribution is put in jeopardy. As she struggles to break the cycles of abuse, her doppelgänger slowly begins piecing together the story of her previous life as a dishonorable man known as Lord Hadrian.

This inspiring novel—presumably the first of a series—is powered by its visionary philosophical content. (“It is time for humanity to move into higher levels of intelligence…by taking responsibility for all our actions, allowing ourselves to grow into the consciousness of what we are…”)  But there are minor flaws. The conclusion is anticlimactic after such an emotionally and thematically intense build-up, and the cameo by real-life spiritual healer Howard Wills, whose teaching and prayers are used throughout, feels a bit adulatory.

Such shortcomings aside, The Karma Chronicles: Hadrian’s Seal delivers an ambitious and enlightening read.