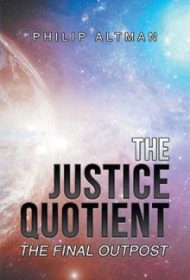 The Justice Quotient: The Final Outpost concludes Philip Altman’s grand-scale science fiction trilogy (preceded by 2056: Meltdown and The Alien Veil) — a saga concerning an alien invasion that explores the consequences of corruption in the judicial systems of both humankind and alien worlds.

In 2086, the populations of planets in the solar system are scurrying to figure out an exit plan in case their overpopulated worlds—all running low on resources—are unable to continue sustaining life. Tensions are understandably high. After aliens spotted in different parts of England are captured and sent back to their planets, humankind focuses on how to defend its planet from future invasions. At the same time, alien factions from Mars and Jupiter are experiencing a similar dilemma: how to defend their (perhaps) soon-to-be uninhabitable homes while focusing on finding new ones. In the chaos, injustice runs rampant in the respective legal systems.

While the idea of populations running out of resources is provocative and timely, the novel suffers from serious flaws. There’s a conspicuous lack of description. The aliens from Jupiter and Mars are rarely detailed, and when they are, the description is nebulous: “They were a motley-looking lot,” “they were nothing like those he’d seen in the cinema,” etc. As such, characters lack dimension and are flat and uninteresting. The story also jumps from character to character, undermining continuity.

Perhaps most importantly, the action is baffling and often incoherent: Starships are shot “down” in space; aliens who understand space travel can’t seem to figure out a human light switch; the aliens have human names like Marky and Robert and speak English fluently. At one point, a Jupiterian alien even sneaks into a Jupiter hospital wearing a fake moustache.

Overall, the writing is unpolished and repetitive: (“…looking around pointlessly for the aliens to prove his point… ”)

Such issues accumulate, creating a final offering in the trilogy that is likely to disappoint readers, despite its thematic potential.