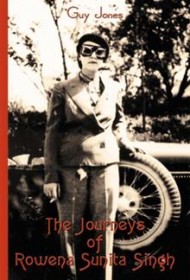 Guy Jones’ The Journeys of Rowena Sunita Singh recounts the life of Rowena Singh, née Rees. Covering a span of seven decades, the narrative begins with Rowena’s birth in a Welsh coal mining town in the 1920s and follows Rowena to India after she marries Raghubir Singh, an Indian cinematographer. The marriage between Raghubir and Rowena soon disintegrates, and Rowena forms liaisons with a series of men in order to provide for herself and her children. Eventually, she makes her way back to England, where she remarries and carves out a new life for herself and her children.

Most of the men in Rowena’s life abuse her. Her father rapes her. Her first husband is, at first, controlling and then neglectful. Her husband’s brother, with whom she forms a relationship, threatens her with a gun. The men who manage the school where she works demand sex in return for the retention of her position. It is only when Rowena meets the man who becomes her second husband that she finally finds a supportive partner.

Although the trajectory of Rowena’s life is embedded in the most interesting of times (World War II and India’s bid for home rule), the author gives only the sketchiest account of the milieu in which Rowena lives. He also devotes little time to describing the people in Rowena’s life or the places in which she lives. His chronicle is, instead, so narrowly focused on his subject’s emotional reactions to her various relationships, that it reads more like a personal family memoir than a biography. Most readers will find it hard to engage in what appears to be a series of justifications for the protagonist’s choices in relation to sparsely described events.

The book, moreover, is rife with fragments, run-on sentences and verb agreement problems. It will require considerable rewriting to make it reader-worthy.