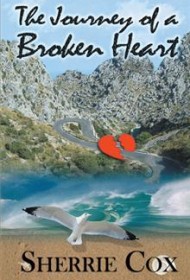 Sherrie Cox’s The Journey of a Broken Heart follows a young girl’s journey as she endures sexual abuse.

The novel begins when Sally, the second oldest daughter in a poverty-stricken West Virginia family of five girls, is a teenager. She’s the victim of incest: first at the hands of her grandfather, and, later, her Uncle Bear. Whether her sisters suffer the same fate with other family members is never revealed; this is strictly Sally’s story.

The narrative involves Sally’s relationships with older men, including Uncle Bear, who coerces her to move to North Carolina. It seems unlikely that family members wouldn’t suspect their incestuous bond. It’s also unlikely that Bear would have allowed Sally the independence to pursue her own interests. Yet she becomes a hairdresser and meets the man she’ll marry. Bear remains in the picture, which doesn’t work for Sally’s marriage — and never seems like a realistic scenario.

Sally’s voice and belief in herself are much stronger than her actions. She seems determined and confident even when making poor decisions. Cox would have been more successful had she presented a more realistic vulnerable side to Sally. Here, when Sally becomes upset and cries, no one pushes to know why and she doesn’t keep it up for long. At those times when she should be afraid, her fear is never palpable or all-consuming — a reaction one would expect in a young girl.

The story moves from the coal mines to the Carolina coast. Sally isn’t held captive, doesn’t appear to harbor ill will to her uncle and is able, in a fashion, to move on with her life. The book’s lack of depth and emotion quickly becomes its fatal flaw. While The Journey of a Broken Heart is ultimately meant to be a love-conquers-all story, the battle is never believable and the story falters as a result.