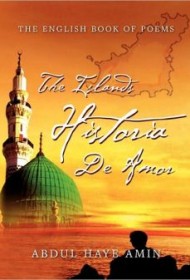 English is a language of amalgams and borrowings, new coinages and well-worn idioms, all of which contribute to its reputation as a great language for writers. Abdul Haye Amin distills his thoughts and experiences into English, his second language, in his book of poems The Islands Historia De Amor, but the nuances of the language most often elude him.

This is a challenging book, to say the least. There are obscure, sometimes confusing references, and various imperfections due to Amin’s limited sense of English. (Amin has previously written poems in his first language, Bengali.) Certain phrases are repeated numerous times: Amin, for example, clearly has an issue with the 17.5% V.A.T. (value added tax) in England, as it’s mentioned on at least ten different occasions — but it’s never clear exactly what that issue is.

“The States Fresh Green Salad” is another repeated term, but its true meaning is known only to the author, a fact that might equally apply to other passages, such as this, from the poem “Share the glory of the States Publics jail” : “After celebration with sun page, not, Editor, but, with coconut lotion or Drinks,/But, fake plastic surgery Doctors for Watermelon,/After the taste of watermelon, let go to Court for settlement cost for Taste of divorce…”

Teasing meaning from such passages is difficult, and there are no discernable efforts at rhyme or other poetic techniques here. On the plus side, the book itself is impressive: 8.5 X 11 inches, with sturdy heft and high quality color. Some of the photos reproduced within aren’t of sufficient size and quality to make full use of the format’s potential, but the cover, which does, is striking.

Amin’s passion infuses his writing, but overall, too much is lost in translation from his thoughts to the final poems. Hopefully, as Amin’s mastery of English improves, his efforts to write poetry in English will, too.