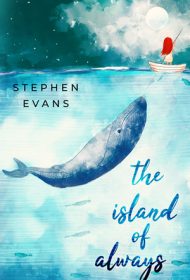 In Stephen Evans’ smart and well-crafted novel The Island of Always, the former wife and law partner of a prominent environmental attorney must deal with the fall-out of her ex-husband’s delusional behavior and ultimately reconcile the draw of his quixotic personality and their unbreakable bond.

Nicholas Ward is a man who doesn’t make plans; “He has visions.” Unfortunately, such foresight and a recent stunt using the pool at the Minneapolis mayor’s mansion as a sanctuary for endangered lobsters, has landed him in the Golden Valley Psychiatric Institute. His annoyed, yet concerned ex, Lena Grant, comes to the rescue. With Lena as temporary guardian and an agreement to do community service at a local animal shelter, along with counseling and meds, Nick is released. While keeping his lovable sheepdog puppet in tow, the “Sancho” to Nick’s Don Quixote-esque personality, the tryingly affable duo continues to test Lena’s feelings and patience.

From a well-executed Pied-Piper getaway where Nick lures a menagerie of animals to island safety, to courtroom drama with a waved gun, Evans details the happenings that continue to put Nick back in the psych ward. “You never support any of my projects” speaks to the comic, cheeky banter Nick often poses in response to Lena’s frustrations. Here, the nuanced balance of narrative and refreshing dialogue keep the story moving at a steady pace.

Whether discussing the comic-book loving hospital attendant or the psychiatrist with oddly empty office book shelves, Evans finely captures the characters and their surroundings. Interjected past time frames provide background for Nick and Lena’s early relationship, detailed in a previous work.

While there are a few minor, missing or duplicated word errors, and the legal system’s tolerance of Nick’s felonious actions may seem over the top, Evans has gathered a truly amiable cast of characters, entwined with heartfelt emotions. Literary audiences will easily forego any disbelief and indulge their imaginations in this highly entertaining and worthwhile read.