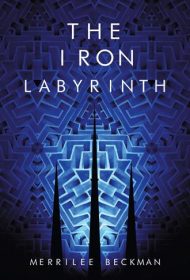 Set in 1947 England, Merrilee Beckman’s debut novel, the first book in a trilogy, is a thought-provoking work of speculative fiction that revolves around a mild-mannered editor who finds himself inexplicably transported underground, where he becomes one of countless slaves forced to exist in a nightmarish iron labyrinth.

The last memory Brian Renwick has of his previous life was standing in his kitchen opening a window. Now he’s a slave named Colum whose sadistic master (“call me Uncle”) uses mental and physical manipulation to break the editor down and recreate him for his own nefarious purposes.

Surrounded by a strange blue fog and unfathomably deep waters, the subterranean labyrinth is seemingly impossible to escape. Time ceases to exist. Renwick is locked in an endless cycle of back-breaking labor extending the tunnels with huge iron blocks, eating gruel, and sleeping in an iron prison cell. With his identity slipping away, he attempts to escape his prison and regain his freedom. Meanwhile, back in England, Renwick’s friend Roche investigates his coworker’s strange disappearance.

As Renwick’s bizarre journey unfolds, the author plants intriguing speculative plot seeds, including time travel and alien worlds, and questions the very nature of reality. “Reality, at its heart, is ephemeral,” she writes.

These hooks open the story to limitless possibilities, and readers will find themselves furiously turning pages to fit the various puzzle pieces together to reveal the ultimate purpose of Uncle and the iron labyrinth. Additionally, Beckman does an exceptional job making Renwick a three-dimensional and endearing character, one that readers are emotionally connected to and invested in. The conclusion, however, is somewhat underwhelming, and may leave readers who were hoping for a more thematically impactful resolution less than satisfied.

However, while the story’s ending is disappointing, the rest of the novel is gripping. Readers will find the journey through Beckman’s narrative labyrinth nothing short of thrilling.