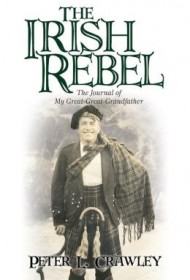 The Irish Rebel is based in the broadest terms on author Peter L. Crawley’s ancestor, Edward Ruth. Ruth and his wife, Katherine were real, Crawley tells us, as were two other characters in the book: Civil War notables Jefferson Davis, who was president of the Confederate States, and John Hunt Morgan, a Confederate general. Morgan in particular plays a pivotal role in Rebel.

The novel tells the story of Ruth’s life, starting with an impoverished childhood in famine-ravaged Ireland. He and his family came to the United States, where he led a most interesting life: first in New York, working on behalf of Tammany Hall politicians, then becoming a dental apprentice in Kentucky. He later met Morgan and became one of his infamous Raiders, was seriously wounded in the Civil War and spent almost two years in a Union prison before being rescued by Katherine, the love of his life, whose story is interwoven throughout. Rebel concludes with Ruth living in Minnesota in the 1880s, putting his life to paper.

The writing in The Irish Rebel could use some refining. The narrator’s language is consistently inconsistent. He sometimes writes as a poorly educated rustic (“This came after helping me poor ma . . . “), and sometimes uses erudite words such as “didactic,” “truculent,” and “inculcated.” The author also puts decidedly modern expressions and terms in his 19th century narrator’s mouth: “Chinese fire drill,” for example, which linguistic experts say entered the lexicon in the early 1900s, and “ticked off,” the earliest known example of which appeared in print in 1915.

Crawley is also fond of sentence fragments, which make the narrative somewhat conversational but also difficult to follow, and he frequently misplaces commas.

While the story is often interesting, all of those issues contribute to making The Irish Rebel a slow and uneven read overall. As a result, the novel may have trouble finding an eager audience.