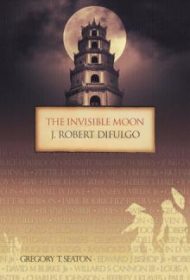 Written by a Navy Vietnam veteran, The Invisible Moon’s richly detailed storyline moves between the 1960s and Vietnam and the 1990s, when the story’s protagonist tries to put his ghosts to rest.

In 1965, an era when homosexuality is a matter for shame and secrecy, Bryan Ruocco is engaged to his girlfriend. He joins the Navy out of a sense of loyalty to America and a wish to help halt the spread of communism. He is assigned to the supply ship USS Delaware. Pegged as vulnerable and likely gay, Bryan is gang-raped by three sailors. His friend Greg Seaton witnesses the attack, later berating himself for his cowardice in not interfering. Still, the incident brings the two men closer together.

The ship makes multiple trips to Vietnam, where Greg finds a girlfriend named Tuyet, while Bryan is determined to remain true to his fiancée back home. For nearly half the book, war gets scant mention as personal relationships develop. The two men are tentative in their love for each other: When Greg tells Bryan he loves him, Bryan asks, “Love in queer way?” Greg says, “No! No! I mean a love between two friends or brothers. A deep love.”

The three main characters finally get caught up in the action during the 1968 Tet Offensive, when Tet’s horror inflicts deep personal pain on Bryan’s psyche and dramatic twists change everything.

At times the dialogue is stilted and the two men’s intense emotions wear thin. But the detailed descriptions of Vietnam show that the author knows his subject matter well. All three main characters display a basic decency and caring for each other, while Tuyet offers up some interesting surprises as she turns out to be the toughest of the three.

Overall, fine descriptions and sympathetic characters make this novel well worth the read, particularly for fans of gay fiction or stories set in Vietnam.