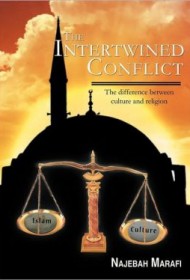 The Intertwined Conflict recounts the personal narrative of Najebah Marafi, a Kuwaiti Muslim who seeks to chronicle the differences that often arise between the teachings of the Quran and the cultural practices of Islamic societies — advocating a moderate, rather than conservative view of the religion, one that eschews violence.

Marafi begins her book without much of an introduction, launching directly into cataloging cultural practices such as marriage, sex, and women’s role in society, how these practices relate to (and sometimes contradict) the Quran and how they differ from those of other religions and the West. An entire chapter is devoted to detailing the facets of jihad and the process by which it became a rallying cry of terrorists. Marafi ends the book with a brief biography of growing up in Kuwait with a father of strong religious ethics and belief.

While intriguing, Marafi’s arguments rely too heavily on personal observation while citing minimal sources. For example, when she discusses parents who allow their female progeny to wed what she views as unworthy spouses, she writes, “They marry their daughter to an idiot who doesn’t have an education, does not pray, and basically is not a good Muslim.”

Other times she can be overly simplistic. When discussing the complex issue of why some Muslims are drawn to terrorism, she states, “They are morons and will probably never even get the scent of heaven because they killed or murdered innocent people with families.” And even when sources are cited, they aren’t necessarily significant — for example a quote from the CliffsNotes version of Pride and Prejudice appears on page 95.

In sum, while The Intertwined Conflict offers insight into a misunderstood religion that might appeal to some readers, it’s dearth of supporting facts mutes its ultimate effectiveness.