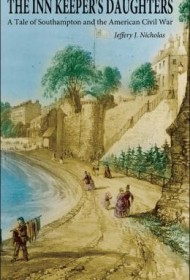 In Jeffery J. Nicholas’s novel, The Inn Keeper’s Daughters, the long arm of America’s Civil War reaches the single dock of Southampton, England, where it has tragic effects on one family. Central to the story is the Bell Inn, run by the Day family, which consists of a widowed father and his daughters Rachel and Judith.

The story, told by the girls’ second cousin Tommy, opens when the three are young and inclined toward mischief. A clothes-soiling incident near some mud flats affords Tommy his first glimpse of headstrong Judy’s pantaloons, leading to more forbidden glances and touches as the two grow older.

Change occurs when a Confederate ship, the CSS NASHVILLE, enters Southampton and the crew frequents the Bell Inn, exciting the interest of restless Judy. Tommy, bored with his routine greengrocer’s job, goes to sea, where he also becomes embroiled in America’s conflict. He witnesses blockade-running, British ships thwarting Federal and Confederate ships from extending their war into neutral waters and, finally, he is at war himself when the mercantile ship he is working on becomes commissioned for the Confederate States.

The war claims an English victim when Judy elopes with a Southern officer, with tragic consequences that nearly drive Tommy to madness.

Nicholas’s strong, consistent narrative replete with well-drawn characters is firmly in its time and place, and his historical accuracy lends credence to the story. Unfortunately, the intended audience is unclear. Men will be unlikely to read the book, even with Tommy and Judy’s Victorian fumblings, because the first half is devoted to children and family interactions that will be of greater interest to women. Women will lose interest in the second half, however, which offers extensive sea-faring details. As such, despite the author’s display of writing skill, it’s difficult to imagine a large audience for this novel.