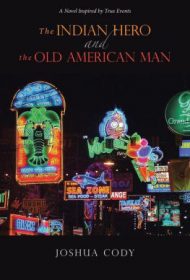 The Indian Hero and the Old American Man tells a tale about two friends, one an elderly American and the other a younger, would-be Bollywood screenwriter.

The story revolves around a two-week trip the pair takes from Abu Dhabi, where they live, to Thailand. The “old American man” (also sometimes referred to as Poppa and once as Cody) wants to get his 37-year-old virgin friend laid. The Indian Hero (nicknamed “Hero” by the old guy) has worked for a year without pay, has a wife who won’t consummate their marriage of 12 years, and a gold-digging, yet non-sexual, girlfriend. The old American man thinks hot sex with Thai prostitutes will cure his woes, and sure enough, the two men fall in love with two prostitutes named L and Dao. As the men interact with these hookers with hearts of gold, the novel evolves into an almost, but not quite chaste, double romance.

The novel has high aspirations but a slim plot. While it’s billed as having “elements of magical realism and science fiction,” readers will discover this merely means magic rings and computer-hacking aliens that many readers might find extraneous to the story. There isn’t much conflict, and what exists is quickly resolved. The characters often say what they’re going to do and then rather benignly follow those exact directives.

The novel’s quirky premise might appeal to men of an older generation, but those who find this idea intriguing might also be disappointed that the sex scenes are mostly vague, rather than more graphic. Meanwhile, female readers are likely to be deterred by the elements of prostitution and chauvinism. All readers will weary of the novel’s stilted dialogue and exposition, as well as trite sentences such as “The Hero and the beautiful bar girl had eyes only for each other.”

Due to such issues, the novel requires revision before it is likely to attract enthusiastic readers.