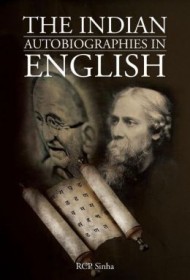 Serious students of memoir and South Asian literature will appreciate this scholarly look at how written self-portrayal has developed in the world’s largest democracy.

Author R.C.P. Sinha calls the root of Indo-Anglian autobiography a “happy union” of two traditions. “The extrovert culture of the West,” he writes, helped turn the Indian mind, previously inhibited in discussing personal matters, “inward and direct(ed) it on its path to the exploration of the inner psyche.” A former English professor retired from Patna University and a translator of the Iliad and the Odyssey into Hindi, Sinha traces the evolution of Indian memoir style from Victorian elaboration to terse contemporary speech. He has mixed emotions about the waning influence of English in his homeland as “regional languages are gradually being inducted into the portals of learning.”

Sinha has harsh words for a current group of Indian memoirists whose “hate-India stance,” he believes, is nothing more than “an advertising stunt” to woo Western readers. Novelist Sasthi Brata (born 1939) is singled out for particular scorn.

Casual Western readers may not be familiar with some Indian writers discussed here – religious reformer Raja Rammohun Roy (1772-1833), for instance, or 20th century poet and novelist Nirad C. Chaudhuri – but Sinha brings them vividly to life. Meanwhile, his examinations of such global figures as Gandhi (“whose vision, essentially theo-centric, is yet realized primarily in terms of action in the world he lived in”) and Nehru (“born in a family in which English manners and values were admired and adopted with enthusiasm”) shed new light on these figures – and their most personal writing.

This rigorous, eloquent, compelling author concludes that Indo-Anglian autobiography was made urgent, as colonialism receded in the 20th century, by his countrymen’s “acute search for a national identity – in political terms, a search for an independent sovereign state of India.” In this light, he has served those countrymen and his readers quite well.