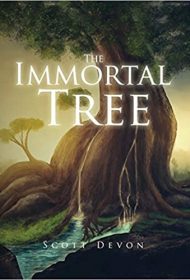 Scott Devon’s debut is an unusual and meandering fantasy derived from biblical mythology.

The story begins in Eden with a Dragon King who rules over the beasts and protects a magical, immortality-granting tree. The narrative largely shifts between the animal kingdom and a wicked band of humans spawned by the evil Kahn (blatantly modelled off the biblical figure Cain).

The Dragon King and his animal subjects don’t seem to have much motivation beyond living peacefully and, in the dragon’s case, producing an heir. Much less attention is focused on the humans, with the cruel Kahn and his band of violent and sadistic descendants taking center stage, engaging in senseless acts of wanton violence and viciousness until they eventually wipe themselves out on their own.

By contrast, the dragon and his descendants are portrayed as wise, compassionate, and essentially without flaw, culminating in the messiah-like figure of the dragon’s grandson, Anamar, who is born to the dragon’s son and his human wife. Likewise, other creatures of the animal kingdom (primarily an owl and a huge, white dinosaur) are shown to be selfless, kind and honest at all times.

This would seem to be building toward some morality lesson, but the series of vignettes can only loosely be called a plot, and there doesn’t appear to be any overarching lesson to be gained aside from the implication that humanity is weak and prone to corruption and violence.

In addition, the audience is uncertain. The subject matter includes mature events, including rape, murder, kidnapping, and violence, but the language is very basic, as if intended for a middle-grade audience. (“He felt the unrest of his mind. His nightmare was a paradise lost; everything he had wished for was destroyed.”)

Furthermore, because the story doesn’t align with biblical mythology and, in fact, conflicts with it, a Judeo/Christian audience might find this offensive, and general readers, unfortunately, are likely to be deterred by the flaws mentioned.