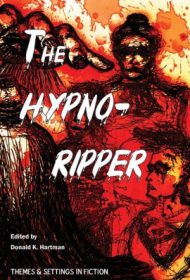 The Hypno-Ripper is the second of two books, edited by Donald K. Hartman, that were written about how hypnotism (or mesmerism) has been used to effect crime and/or death. The first book, Death by Suggestion, collects 22 short stories on the theme. The Hypno-Ripper comprises only two stories written in the late 1800s about Jack the Ripper. It also contains the editor’s biography of author and conman N. T. Oliver (and his many pseudonyms).

The novella, The Whitechapel Mystery, by Oliver, and the short story, “The Whitechapel Horror,” written anonymously (probably by Oliver as well) both purport that Jack the Ripper, one of the most famous and infamous serial killers of all times, was an American, and that the crimes were committed while under a hypnotic trance. Both of the Victorian stories originally appeared as fictional explanations of the “Ripper” killings in contemporary newspapers. Similar phrases as well as style and subject matter point to the same person as their author.

By today’s standards the prose is stilted, and overuse of adverbs and adjectives reflect the attitude of Oliver, who was quoted as saying, “…most of my work was of the sensational detective kind, written for the money they brought me, and I did not feel honored by their authorship.” Yet they have an addictive quality and are fun to read, showing that “true-crime” fiction was as popular a century and a half ago as it is today.

However, the highlight of the book is Hartman’s 40-page biography of Oliver. The editor’s meticulous research enables him to engross readers with the true story of this part-time author, snake-oil salesman, minister, faith healer, medicine show barker, sharp shooter, real estate mogul, city commissioner and, likely, bigamist—proving that, indeed, truth is sometimes stranger than fiction.

Hartman’s book is a highly enjoyable and quick read that shows that, although times change, human nature does not.