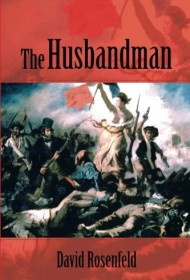 The Husbandman by David Rosenfeld is a poetry collection that generally tackles themes of government power and the people’s struggle for liberty.

The tone throughout is mostly ironic, urgent, and pedantic. The poems make their points in straightforward syntax, generally delivering equal-length stanzas (most often quatrains) and employing various patterns of end rhyme.

Throughout the collection, Rosenfeld criticizes the American economy as led by the Federal Reserve and other institutions. If moralistic, the poems are also lively, as in “The Biggest Bubble,” which employs metaphor, personification, and various allusions in delivering its theme: “But that’s just what the doctor ordered! / Oz the Wizard, Beard’s Bernanke, / Heir to Greenspan’s rotten, sordid, / Sickly, Federal Central Banking….”

Rosenfeld rarely presents imagery for the sake of beauty or fascination but rather to convey his thesis about humanity’s crisis. As such, the poems too often include abstractions that don’t connect to readers on an emotional level, as in “Broken Man Returns”: “Exhaustion claims what despair never could, / For the spirit may outlast the body, sometimes. / Lost freedom evinces that mind over matter / Like justice in reason drops law over crimes.”

The volume also contains one short story, “Something Bubbling (or, One Man, One Vote).” A satire set in a university, it quickly devolves into a long, semi-humorous monologue skewering government control of (soap) production. However, the writing can be clichéd (“The professor’s eyes glinted, like shattered glass”), and the sarcastic tone may be off-putting to some.

One can easily admire Rosenfeld’s moral stance on freedom and justice, but the pedantic nature of the work will be off-putting to many. While not for every reader, those with a libertarian bent who don’t mind impersonal poems that read like vague manifestos of political outrage might enjoy sampling Rosenfeld’s work.