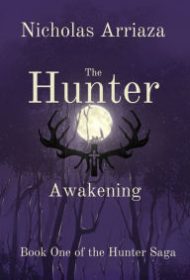 A relentlessly paced, action-packed, and downright fun supernatural thriller, the first installment in Nicholas Arriaza’s series chronicles the lives of an affluent, young Los Angeles couple preparing for the birth of their first child. Complications arise when the woman discovers her fiancé is a werewolf and her soon-to-be in-laws are (literally) a pack of psychos whose actions have unleashed one of the world’s “great terrors” onto Southern California.

Doctor Melisa Castro is the executive vice president of a medical research organization. Her fiancé, Chris Kosmatka, owns numerous nightclubs in LA. With Melisa four months pregnant and Chris about to open a new business venture, life is seemingly idyllic. But when an amnesiac man falls from a cliff-side trail into Melisa’s backyard, her instinct to help the strange man sets into motion a chain of events that will irrevocably change her and Chris’ lives forever.

After the man recovers from life-threatening injuries in a matter of hours and then disappears, Melisa slowly begins to put together the pieces of her suddenly fantastic existence, which includes werewolves, vampires, and a seemingly unstoppable “Hunter” created to wipe all supernatural creatures from the earth.

While the base mythology regarding the creation of the werewolves and vampires seems contrived, the author excels at blending played-out lycanthropic and vampiric clichés (such as the werewolf aversion to silver) with interesting twists on the respective myths, all while creating a story powered by pedal-to-the-metal pacing that makes the book impossible to put down.

Surprisingly, the novel’s most compelling element isn’t the action or supernatural monstrosities. It’s the theme, which is brilliantly symbolized in the shape-shifting characters. It’s about transformation, redemption, salvation. When discussing the monstrous nature of the werewolf, Chris sums up the theme in a few words: “We are not all demons. We can change. I know it.”

This is everything a good supernatural thriller should be: It’s fast, fun, and has undeniable thematic depth. Two (hairy and clawed) thumbs up.