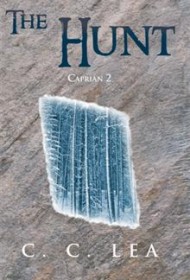 A good fantasy author doesn’t shy away from complexity. In writing a multivolume series with a distinct mythos and a varied cast of magical characters, a detailed backstory and carefully plotted universe are musts.

Unfortunately, C.C. Lea violates that principle in The Hunt, the second volume in the “Caprian” series. The author infuses the series as a whole — which tells the story of supernaturally gifted individuals in an epic, multigenerational battle against a malevolent being — with a well-constructed context. Readers approaching this sequel without the benefit of the first book, however, are at a disadvantage because the author appears to jump into a story that’s already in progress without much of a recap.

Even this slim volume spans hundreds of years: we meet the book’s vampire villains in 12th century France, and they come back to haunt the protagonists hundreds of years later. The heroes, based on a small island in Virginia called Caprian, can read minds, turn into wolves and move objects with their minds. They are the constant target of the vampire Vardan, and the action is based on this good-versus-evil conflict.

We meet a large cast of characters in the first chapters: the villain Vardan in a medieval and modern context, the residents of Caprian in 2008 and Zero, who head to the U.S. from Canada to hunt werewolves. It spills out in fewer than 70 pages, and the author relies largely on dialogue to brief the reader on the progress of the plot. What context there is comes in the form of multiple names and references to past action that are not always clear.

Lea’s narrative style has moments of rich description and compelling eloquence, but this volume, standing on its own, doesn’t do a satisfactory job of giving the reader a full sense of her complex, detailed world.