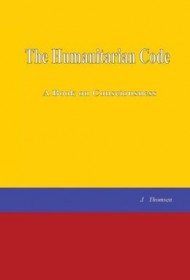 A fan of “real Libertarians” and Ayn Rand, Thomsen writes for those who are as fed up as he is. In shaping his book, he notes that he has “discarded as many rules as humanly possible and yet maintain a book,” in order to be “more entertaining.” But readers will wish he had followed more of those aforementioned rules, as passion and occasional colorful language – relentlessly boldfaced, underlined and bulleted – don’t adequately substitute for clearly elucidated, organized and supported ideas. Readers will find the author’s arguments extremely challenging to follow.

The code of the title is Thomsen’s idea that government’s only legitimate function is to defend individual human rights; he notes that we stand “at One” with the Creator and desire small government, fewer taxes and the greatest possible personal freedom. Frustratingly, he offers no discussion of issues or policies and no ideas for our evolution toward greater consciousness, just an admonition to stop voting for and supporting the two major political parties. “The awareness level contained within the negative throw-away vote,” he writes, “spiritually fails to outweigh the yellow sulfur content of a single sow bug’s popcorn fart.”

Such imaginative turns of phrase are a welcome respite from the author’s relentless diatribe in support of…what? It’s hard to say, as the narrative is replete with sentences that are convoluted and ungrammatical, as in: “The courts do manage once in a rare while to cause human beneficial case law. Such rarity however, makes the rule of handing down purchased case law advancing cartel driven anarchy and violence.” Thomsen also invokes “New Energy,” “Human Evolution,” “Creator Consciousness,” and other inexplicable catchphrases.

Perhaps some reader can relate to this bizarre collection of words, but most will find the book baffling.