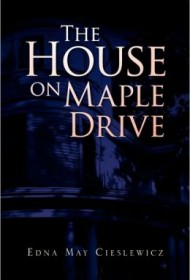 This third mystery by Edna May Cieslewicz centers on two old, architecturally interesting homes on Maple Drive. The Andrews family lives in one, while the other is empty. The husband is critically ill, requiring nursing care. Meanwhile, the mother rules over one son, three daughters and a 2 Â½ old grandson, who also live in the house.

The novel opens with the report that the nurse is missing, and police soon discover that another missing woman disappeared the same day. Both were last seen at the Andrews’ house. In an unlikely move, the police send one of the officers’ relatives to be Mr. Andrews’ new nurse, and she begins to observe strange goings-on in the house.

From there, the plot veers from one odd occurrence to the next. Among them: the Andrews’ youngest daughter is found dead on the front doorstep; a fire breaks out in the house next door; and the Andrews’ grandson is kidnapped. Many of these occurrences unfold in ways that defy explanation. The kidnapping, for example, barely raises an eyebrow among police and family members.

In addition to the bizarre plot, there are other difficulties with this novel. The timeframe of the story is unspecified, so it’s difficult to know if the language and actions are appropriate to the period. The characters are too numerous to track, none well-developed. The dialogue is startling at times (the generally reserved nurse says, at one point, “I have to piss”). And in a book with more of a Happy Days than Sopranos tone, sex scenes and random cursing seem thrown in only to make things more “real.”

Maple Drive would greatly benefit from editing to eliminate inconsistencies in the action. Focusing on a few major characters would enhance the experience for readers, as would consistent and appropriate dialogue and a much stronger sense of setting.