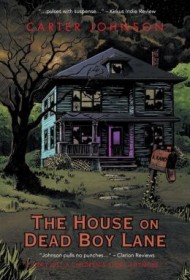 In Carter Johnson’s debut horror novel The House on Dead Boy Lane, a small town is bedeviled by a deserted house that holds a history of torture and murder.

Thirteen-year-old Derek Hall moves to a new town with his recently divorced mother and quickly falls for his next-door neighbor Alex, a beautiful, edgy, cigarette-smoking girl in Derek’s grade. Alex is dating Tony, but she and Derek quickly become romantic, and for a while, Alex cheats on Tony before she breaks up with him. Tony, a bully, torments Derek and starts dating someone else in an effort to make Alex jealous.

Derek discovers that not far from his home is the deserted “House on Dead Boy Lane,” notorious because a boy was murdered there. Rumors say that others who passed through its doors mysteriously disappeared. Alex is increasingly haunted by horrific nightmares and believes the house holds a terrible power over her. Alex, Derek and Derek’s chubby, bespectacled friend Chuckie hatch a plan to explore and exorcise the house.

Additionally, there’s Lucas, a psychotic character who works at the local cinema, sexually abuses his girlfriend, has fantasies of torture and gets aroused by killing animals. There’s also Valerie, who rebels against her strict parents and frequently sneaks out to meet her boyfriend. Both subplots ultimately involve the evil house.

The characters are the strong suit here; Johnson does a fine job of weaving together the large cast and their various subplots. But the writing often bogs down in minutia; we read what characters eat for dinner, what brand of jacket someone wears. It’s difficult to know who the book’s readers would be: Adults probably wouldn’t be interested in 13-year-old protagonists, and the sex and violence are far too graphic for a young adult readership. Also, the book’s conclusion strains credulity and will likely leave readers bewildered and disappointed.

As a result of all these issues, it’s unlikely that the novel will attract a large audience.