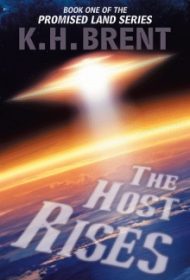 K.H. Brent’s stellar debut novel, the first installment in his Promised Land saga, is a page-turning fusion of apocalyptic fiction, science fiction and mainstream thriller. It’s set in a near-future where the world’s population, on the brink of self-annihilation, is effectively reshaped by a group of seemingly godlike invaders who forcibly bring “a promise of peace.”

The Host Rises takes place in a dystopia where ignorance and apathy have flourished, turning America into a fearful, narrow-minded theocracy. Much of the population has become “Virtuals,” spending the majority of their time in artificial realms while their bodies wither away in virtual living compounds.

The world is irrevocably changed when the Seraphim, members of an entity known as the Host, give humanity an ultimatum: End all conflict and turn all military assets over to the United Nations in 48 hours or be destroyed. When the population of an entire town is instantly killed after not complying, the rest of the world’s governments quickly fall into line.

A year after the “Peace” has been established, the world is markedly different. There are no nations, only regions. English is the global language. Food production is being radically improved and global warming is being addressed. But there are those who don’t trust the seemingly benevolent Host and are covertly attempting to understand its real motivations. Special agent John Harriman and journalist Grace Williams have been investigating the Host from the beginning. When they uncover its true origins, they must attempt to stop its masterful plan before it’s too late.

The writing is fast-paced and full of driving energy, propelling the book through a wealth of plot twists.  Reminiscent of Arthur C. Clarke’s seminal 1953 novel Childhood’s End, Brent’s book is everything good science fiction should be: powered by deeply considered speculation, relentlessly thought-provoking and, above all else, visionary.

Bottom line: The Host Rises is better than the majority of science fiction releases currently on the shelves. Yes, it’s that good.

BlueInk Heads Up: The Star designation is offered with the recognition that copyediting issues remain in need of attention, including improper use of the possessive apostrophe, comma mistakes and word usage errors.