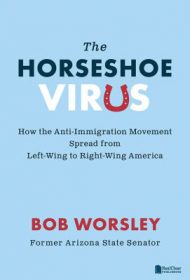 Former Republican Arizona State Senator Bob Worsley is a delightful rarity: a political insider who’s not afraid to criticize his own party and a storyteller who writes with passion and pizazz. In this memoir, he deftly balances first-person narrative, facts, analysis and advocacy.

Worsley was a wealthy Mesa businessman and a Mormon devoted to growing two local congregations when party insiders tapped him to challenge powerful State Senator Russell Pearce in the 2012 primary for the District 25 senate seat. Worsley shared their alarm over SB 1070, anti-immigrant legislation Pearce had championed. It allowed police to stop any person and demand they produce documentation. Worsley was seeing firsthand the damage this inflicted on Latino families in his church, half of whom were deported or fled the state, as well as on Arizona’s economy.

Worsley briskly describes his win against Pearce (an ally of notorious Sheriff Joe Arpaio) and his six years as state senator. He then provides extensive historical context to explain how national anti-immigration trends played out in Arizona.

Worsley argues that the right and left wings of American politics had moved to such extremes that they met each other in the middle, like a horseshoe. If there’s a quibble with the book, it’s that he provides scant evidence of anti-immigrant extremists on the left side of the political spectrum. But over several chapters, he skillfully describes how a web of right-wing zealots like John Tanton and his Federation for American Immigration Reform (FAIR) funded decades of anti-immigrant messaging and lobbying – which spread like a virus.

Thorough research and bold analysis make this book a valuable resource on the hot-button issue of immigration in the U.S.; blunt, fearless writing makes it a terrific read. Worsley recalls, for example, Pearce’s relentless bullying and “bulging biceps that suggest a man with a fixation with pumping iron” during their primary campaign.

Newcomers to the issue and experts alike will enjoy this insider’s bold storytelling.