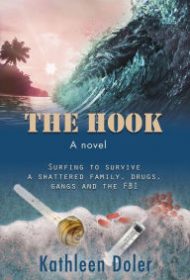 Like the roiling waves that attract Dana, the narrator of Kathleen Doler’s suspense novel, the story washes over readers and leaves them caught in the currents, excited and breathless. The author’s life as a journalist parallels her character’s career as an LA-based business reporter, and like Dana, the author loves to surf.

The Hook opens with Dana heading to Half Moon Bay, her Northern California hometown, due to a family crisis. Her younger brother Shane is in the hospital. She has cared for Shane even before her dysfunctional family was shattered by her mother’s suicide. Everyone has dealt with the pain in different ways: Dana became a journalist. Shane, once a competitive surfer, descended into near-homelessness. Their father barely communicates with anyone. Outwardly, her other brother Terry has a conventional life as an insurance agent and family man, but he later reveals his own post-traumatic reaction.

Doler deftly sets up the family dynamics and introduces a cast of childhood friends. As the story unfolds, we discover that Shane crossed a Thai gang leader led by drug boss Ling. When Dana learns the FBI is looking for Shane while investigating Ling, she protectively places him in a rehab center, playing a risky game of keeping Shane from the authorities. Meanwhile, a turf war escalates between the Thai and Mexican gangs and the narrative accelerates towards the ending. Throughout, Dana falls in love, changes careers and surfs to rejuvenate her spirit.

Doler is a fantastic writer. Her prose is crisp and vivid, immediately engaging readers. She skillfully juggles story lines while employing evocative descriptive passages like “soon the fog blanket will be pulled over the chin of the coastline for the night,” and her references to surfing and the workings of a newsroom ring with authenticity. Well-paced, the book is hard to put down.

Doler writes what she knows, and the depth of her knowledge adds realism and accuracy to The Hook. It makes for a terrific, exciting read.