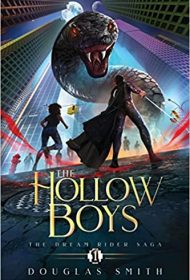 A Canadian teenager—and secret superhero—is tested to the max in this fast-paced fantasy adventure for young adults.

Homeless kids are disappearing from the streets of Toronto. Journalist Harry Lyle doesn’t know how teen Will Dreycott finds answers, but he tells Will what he knows about missing street boys and hopes Will can supply some leads for Lyle to pass to the police. When Will uses his unique ability to search Dream world for clues, interacting with people in this subconscious parallel world, he encounters the Hollow Boys and realizes there’s something sinister going on.

In the tradition of Batman, Will is a rich orphan overseeing a business empire. Only 17, he’s an established graphic novelist creating wildly popular stories about his secret, superhero alter-ego, the Dream Rider. He lives alone in a luxurious white tower block and is afraid to go outside— at least until he meets plain-speaking Case, a homeless girl whose brother has gone missing, and his ordered world turns upside down.

With elements drawn from a range of sources—think The Wizard of Oz, and Voldemort’s horcruxes, then add a sprinkle of Marvel comics, zombies and witchcraft —Smith has created a dramatic, vivid fantasy world for his characters to inhabit. Will and Case are thrown together, and attraction quickly sparks between the two teens. But with secrets and insecurities aplenty, not to mention death threats, kidnapping and blackmail, they have multiple challenges to overcome. Mystery lurks in both characters’ backgrounds, and although the book comes to a satisfying conclusion, unanswered questions will bring readers back for volume two in this proposed trilogy.

The Hollow Boys is an assured, confident novel with strong world-building, sharp dialogue and the perfect balance between action and emotional growth for its main characters. Secondary characters, notably the witch Morrigan, are equally well-rounded. And who can resist Will’s “Doogle” Brian, a fantastical dog that helps him search in the Dream world?

In short, this is a must-read story for YA fantasy fans.