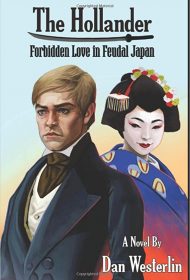 Dan Westerlin’s historical novel peers into an isolated Japan and the closing years of the Dutch colony of Dejima.

In 1851, ambitious young Hendrik de Wolfe marries his boss’s daughter and is appointed overseer of Dejima, the Dutch trading post outside Nagasaki that has for two centuries been Europe’s only contact with Japan. Tensions run high as the Dutch challenge Japanese officials over the country’s steadfast protectionism and de Wolfe fails to understand Japanese culture.

When he receives a young woman, Taka, as a concubine, de Wolfe enjoys a brief idyll while the future of the trading post comes under threat from within and without. But when he travels to Edo to negotiate with Japan’s ruler over the future of Dejima, de Wolfe gets entangled in the efforts of American Commodore Perry to force trade relations upon the country. As imperial Japan is overshadowed by U.S. imperialism, de Wolfe must decide where his loyalties lie.

While there’s a lively story here, the lack of professional editing and formatting drastically inhibit readability. There are no chapters, only sections, leading to an overall sense of disorganization. Scenes are underdeveloped or incomplete, and point of view switches within sections, sometimes within paragraphs. Dialogue, jarringly, is italicized for the Japanese characters, and information the Dutch characters don’t know (for instance, about Japanese apparel or status) which further muddies the point of view.

Although some characters acquire dimension over time, too many principals, including de Wolfe, remain thinly developed. De Wolfe’s wife and Taka are particularly wooden.

Additionally, an overall lack of insight into the motivations of the characters makes some of their decisions confusing, such as when de Wolfe, who lectures his employees about duty and honor, fails to defend his countrymen and sleeps with Taka without once recalling his wife.

Overall, while Westerlin offers an interesting window into world history, the lack of craft, line editing, and grammatical clarity seriously undermine his story.