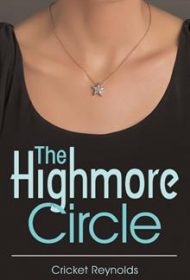 In The Highmore Circle, Cricket Reynolds delivers an utterly engaging, humorous romance that follows a young woman’s life as she wrestles with love and loss.

Gracie Anderson, a college professor in her 30s, finds her dating life so empty that “An exciting Friday night for me was People magazine hitting my mailbox a day early.” She reluctantly agrees to attend a support group for those contending with parental loss at the insistence of her best friend who believes that it offers a potential opportunity for Gracie to meet a man. However, Gracie’s mother died 20 years ago and the group turns out to be for motherless daughters.

Although it appears unlikely that Gracie will bond with this diverse group of women or find romance, she does both, entering into a relationship with a participant’s brother. As their feelings for each other deepen, a past boyfriend reappears, and soon Gracie must choose between the two. She does so while coming to terms with the emotional scars left from her mother’s passing that “ran so deep that I wasn’t even sure where one stopped and another one started.”

Despite its slapstick beginning, The Highmore Circle transcends farce. Reynolds touches on the significance of losing one’s parent and the effects of lingering grief. She writes deftly, with an ear for witty banter, and seamlessly integrates texting exchanges without appearing gimmicky. She also strikes a successful balance between comedy and earnestness while populating the story with empathetic characters and particularly strong women. The novel includes occasional coarse language and an ending that may leave some questioning Gracie’s choice, but readers will easily forgive both.

A page-turning romantic comedy that acknowledges the different ways people mourn and the importance of family and friends in healing, this is a thoroughly enjoyable read.