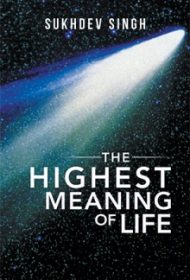 Sukhdev Singh, director of Devatma Organization U.K., presents the principles of Dev-Dharma in this shelf-bending offering.

This belief system, founded by an Indian man known as Devatma, uses “scientific methods to discover human nature and its destiny.” It teaches that the soul is biological in origin and that evolution allows man to pursue Dev-Dharma’s highest values of Truth, Goodness, and Beauty. On this evolutionary path, man struggles to subdue “low-loves and low-hates” in order to replace them with “high loves and high hates.” When man has attained this purification, he achieves a state of altruism, “true harmony with existence in nature.” Nature is made of “four kingdoms…humans, animals, plants, and the physical worlds,” and the perfect man lives in service to them.

These basics are made reasonably clear in the Foreword and first chapter. The vast majority of the remaining book is a re-iteration and expansion of these principles in the form of poems, short, numbered paragraphs, and lists of bullet points.

Unfortunately, there’s little logical consistency to the ideas. For example, while the goal is to live in harmony with all humans, “we must not tolerate the weak and diseased,” writes the author. Later, though, it’s deemed positive to desire to alleviate the pain and suffering of another. On one page, it’s acceptable to desire approval from others; on the next, it’s to be avoided because it will lead to excessive concern for one’s reputation.

The poems are abstract and difficult to grasp, and the narrative has many technical errors. There are missing articles throughout (“As long [sic] we carry the life and light of Devatma within us…”). The same words, phrases, and concepts are repeated in a random, confusing way. Words such as moksha, which clearly have significance in this belief system, are never clearly defined.

Dev-Dharma may be valuable to a spiritual seeker with a scientific bent, but this explanation of it will likely frustrate those looking for a logical presentation.