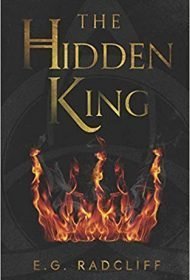 In this intriguing hero’s journey intended for young adult readers, a young man endures physical, emotional and intellectual challenges as he struggles to understand his destiny.

Long ago and far away, Aed has crippled hands and magical powers. He lives with his same-sex life partner, Ninian, and a little boy, Ronan, whom they have raised since birth. They reside in an impoverished, dangerous area known as The Maze. Following a tragedy, Aed and Ronan leave for The White City, a richer, safer area where Aed hopes for a better life.

Upon arrival, they meet Boudicca, a good-hearted woman who provides them shelter. However, Boudicca’s brother, general of the guard for the corrupt king, has other plans for them because of their criminal status as refugees from The Maze. Thus, Aed learns that he has escaped a hard life, only to find that more struggles—and a surprising destiny—await him.

Author E.G. Radcliff smoothly depicts the passing of time by wisely avoiding unnecessary details surrounding Aed’s six-week recovery from horrific torture; instead, the author condenses the experience into a few paragraphs by highlighting Ronan’s good health, Aed’s healing and learning and the city’s rising chaos. She also skillfully sprinkles a few Gaelic words, such as Ceann Beag (little one), throughout the text to suggest a different language without overwhelming readers.

Most importantly, Radcliff brings the main characters fully alive, enhancing them with intriguing supporting characters, such as Boudicca’s conniving stepfather; a lonely prisoner in the castle’s dungeon, and the lunatic King Seisyll. The story moves at a fast pace, and readers will find stirring action scenes and an engaging writing style.

This enthralling fantasy novel is intended as the first in a series, with Book Two serving as a prequel delving into Aed’s early years and his relationship with Ninian. With its unusual characters and compelling story, The Hidden King will be enjoyed by fantasy readers of all ages.