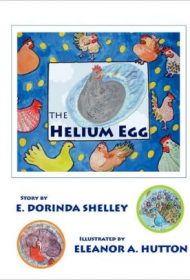 An off-beat story about a floating egg and the havoc it wreaks, The Helium Egg comes with an unexpected paranormal twist.

Kath, the only human in the story, discovers a very large blue egg while collecting eggs from the barn one morning. When her back is turned, a black hen rescues the strange egg from her basket, adding it to her own brood. The egg gets lighter and lighter as the days go by, until it begins to float. Geese, turkeys and other farm animals jump aboard to help the black hen keep the egg.

Eventually, it flies away and has to be chased by a retired race horse, who returns it to its adoptive mother. The animals trap the egg in the barn, where it floats into the rafters despite their efforts to weight it down. Finally, the egg cracks, releasing a rush of air which allows it to return to the floor of the barn. Then out emerge several baby ghosts. The hen adopts the colorful baby ghosts, creating one big family.

Abstract illustrations depict the strange story, with pages of roughly drawn animals floating on a blue expanse meant to depict the egg. The story builds tension as readers wonder what animal could have possibly laid such an egg, but the resulting conclusion will likely be divisive, with some delighted by the surprising explanation and many others annoyed by an answer that seems untethered to reality.

Although the vocabulary is generally approachable, the story’s length will make it a difficult read for youngsters, and its repetitive elements (too many pages are devoted to detailing an increasing number of animals jumping onto the egg) diffuse the momentum.

A tale with an unusual premise and an even more unusual conclusion, The Helium Egg is slow in many parts. Still, it might engage young readers who enjoy magical elements in their stories.